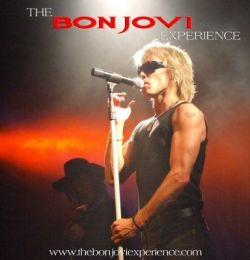 My husband is a huge Bon Jovi fan and this was right up his street, we were all on our feet the whole night dancing and shouting, it was tremendous fun.

Tony the lead singer was fantastic, every move he made and every note he sang was like watching Jon Bon Jovi himself, we were not disappointed one bit. His voice wasn’t exactly like Jon Bon Jovi, but it was extremely close. I have to say though when I heard Jon Bon Jovi sing live on one of my hubby’s CDs for the first time the man himself didn’t sound like Bon Jovi to me :-) My hubby kept asking who do you think it is singing “I know it’s a Bon Jovi song,” I said “but I don’t have a clue who’s singing” :-)

Tony was an excellent tribute to Bon Jovi, even my ears couldn’t tell the difference between the two, he even hit the hard notes with no problems at all, he nailed every movement of the Jovi. Brilliantly and I loved every minute of his performance.

The lead guitarist Edd was very good, easily as good as Richie Sambora and I was surprised to read that Edd is a self taught musician, he didn’t sing though, so don’t know if his voice is as good as Richie’s: my hubby has Richie Samboras solo album at home, so in the band Jon Bon Jovi isn’t the only one who can sing. The Bon Jovi Experience band members did do the backing vocals really well. 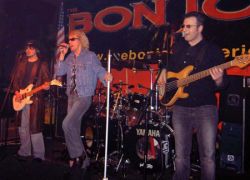 Johnny is a fantastic drummer, I was banging my foot on the floor all night along with the drum beat :-)

Each of the band members in The Bon Jovi Experience takes on the persona of the original Bon Jovi band members and they are all exceptional.

Every song that was sang was the Best of Bon Jovi, all were body rocking fun, not one was slow which meant all night long we got to dance. We weren’t the only ones dancing, about 3/4s of the audience, particularly in the second half was on their feet dancing and shouting, the show was electric which was quite a surprise as the Embassy wasn’t close to full (less than half capacity). I can only imagine what it would be like with a crowded venue, more people in an audience, more they play off one another’s enjoyment.

After The Bon Jovi Experience show my face was bright red and I was sweating profusely, but it felt wonderful :-) we left the Embassy theatre very animated and talked about how much fun we had all the way home.

The Embassy had about 400 people in for The Bon Jovi Experience and this can spell trouble for the performers on stage. Normally with few in the audience it can mean people are more reluctant to kick back and fully enjoy the show, not everyone is like me up on their feet from song one :-) 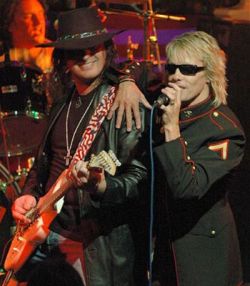 The fact that they followed an actual live concert meant it was a perfect replica of a Bon Jovi show, it real did feel like a real Bon Jovi concert and although there was only around 400 people in the audience almost all of them threw themselves into the experience, so the Embassy felt like the place was full. It was one of the loudest crowds we have ever heard at the Skegness Embassy theatre and we’ve seen it full.

Lots of fun, my youngest son was jumping and dancing all night even my 18 year old (home for the weekend from University) was on his feet and your lucky to see him move at all most days!! My hubby had the biggest smile on his face, we all threw ourselves into the show 100%.

I love the way the band got the audience to warm up there voices with nah nah na’s and follow the leader type activities which gave the show an authentic concert feel and I really liked it when the women in the audience won the men for being the loudest at yelling. Way to go girls, we rocked compared to the fellas :-)

With great songs all night like : Bed of Roses, It’s My Life, Born to be My Baby, Runaway, Always, Shot through the Heart, Wanted Dead or Alive, Bad Medicine, I’d Die For You. Keep the Faith, Lulu’s Shout and everyones all time favourite Living on a Prayer.

Would We Go Again : Yes! try and stop me :)
Would We Recommend To Others: Yes
Was It Value For Money: Yes
Recommended For: All ages that like rock or Bon Jovi